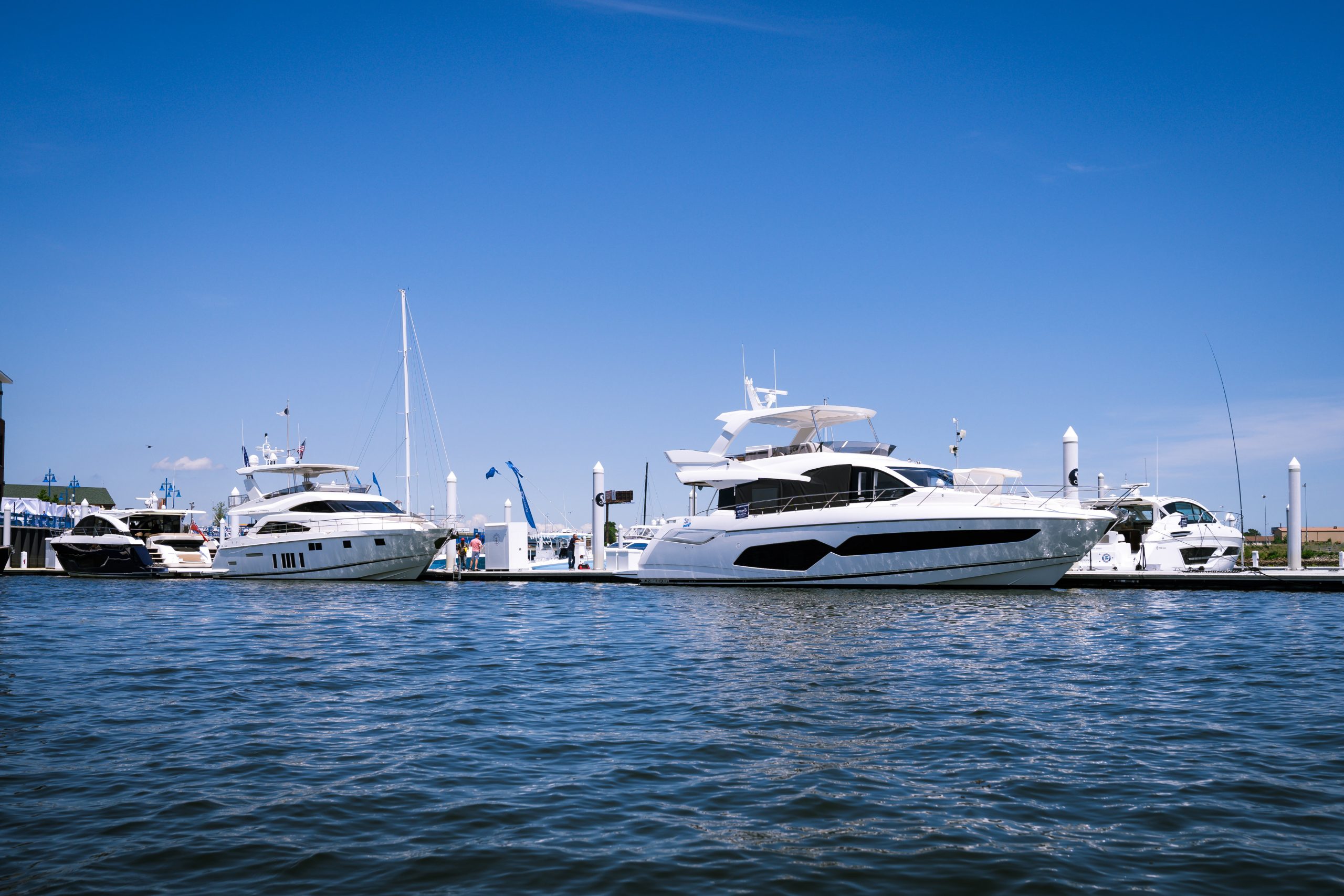 As in-person boat shows are being cancelled around the world due to the covid-19 pandemic, a fledgling yacht and charter event in Connecticut was held on Father’s Day weekend, drawing more than 3,000 people.

Producer Showpiece Shows worked closely with the RCI Group and Steelpointe Harbor in Bridgeport, Conn., to follow a responsible plan of action, using the wide docks and expanded outdoor areas to provide plenty of room for social distancing at the show.

The Steelpointe Yacht & Charter Show had always been planned as an invitation-only to bring attention to the Bridgeport area, but the coronavirus prompted a host of safety measures, said Steelpointe Harbor Marina owner Robert Christoph Jr. 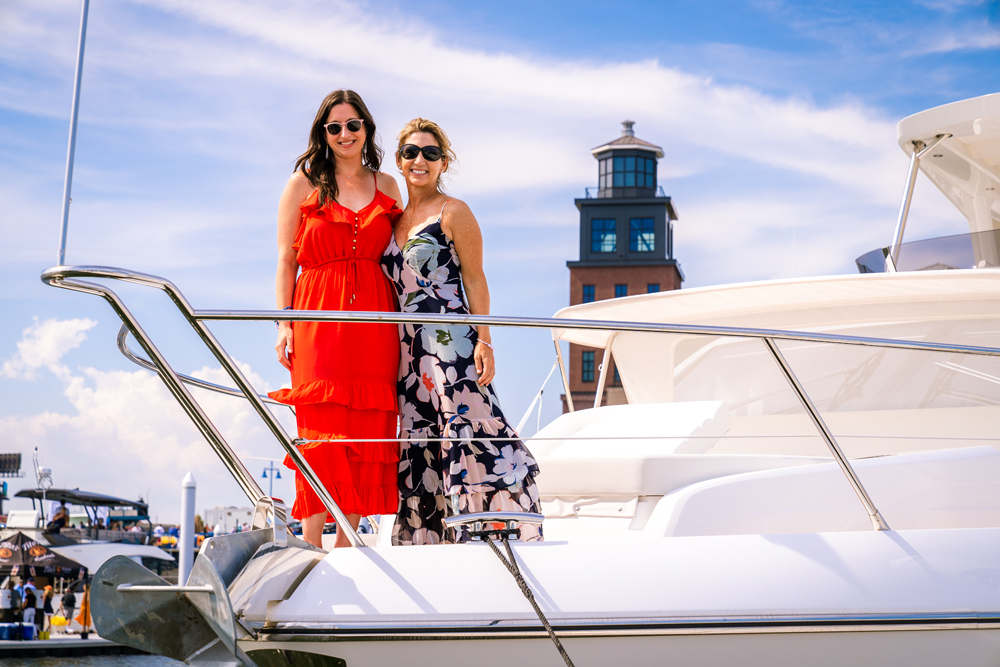 History was made this past weekend at Steelpointe Harbor in Bridgeport. For the first time ever a Yacht and Charter Show in the Park City drew people from around the country. The Bridgeport Harbor Marina was filled with yachts, charter boats, antique and luxury cars, invited patrons, and vendors. Skyplanes buzzed the Marina, assorted food trucks lined up, and luxury exhibitors showed off their wares as helicopters hovered overhead. Mayor Joe Ganim arrived in style in a 435cc Everglades boat, accompanied by the Showpiece Show’s staff. 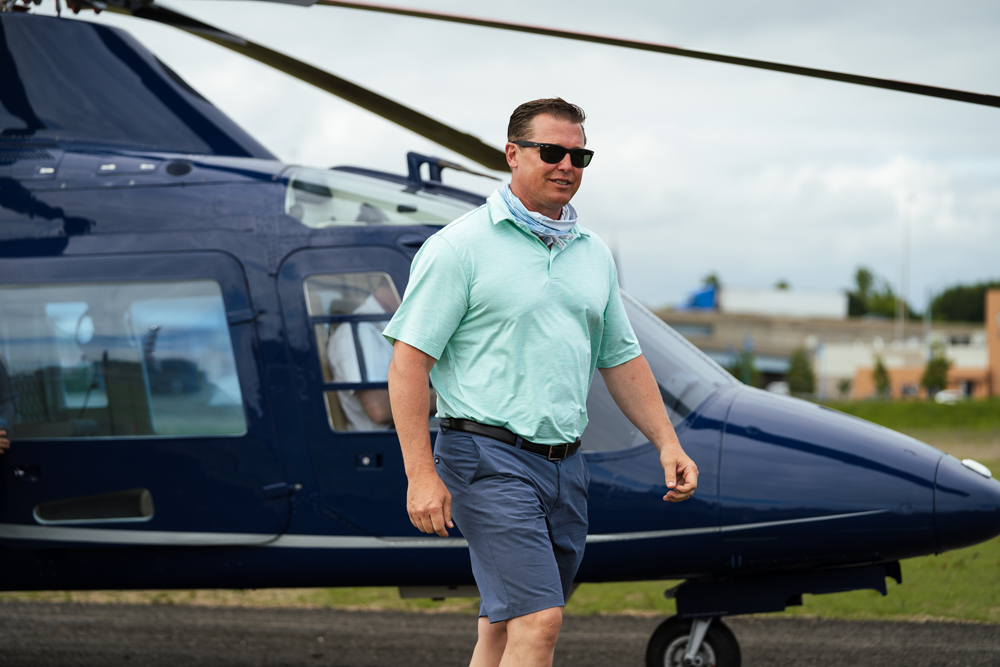 It all started on Thursday, June 18th ,2020 when the President of Operations for Bridgeport Landing Development Robert Christoph Jr. became the first person to arrive via helicopter on Bridgeport’s East Side Steelpointe Harbor Peninsula. This iconic moment set the stage for the big weekend. Thanks to Azimuth Aviation of Stratford, Connecticut history was made aboard one of their flying machines.

Kitty McGowen, an organizer of the event and President of the U.S. Superyacht Association said the boat show was particularly important for the Bridgeport area. “It’s not just about the ‘2 percenters’ who can afford expensive boats. It’s really about the jobs,” McGowen said. McGowen believes that the people and families are positively impacted by the increase of boats in the area. McGowen added the event brings more jobs and puts a focus on the entire city of Bridgeport. “The thing about the boating industry is that it’s good for this community and this brings hope to this community, this project bringing jobs and bringing a lot of focus in a very positive way that’s going to help lift up the entire city of Bridgeport,” says McGowan. The Christoph’s intend for their Yacht and Charter Boat event to be an annual luxury boat show that showcases their state-of-the-art 200-slip Bridgeport Harbor Marina. Christoph said, “They (guests) enjoyed Bridgeport Harbor in a way they haven’t in 100 years. A lot of people don’t know it exists, so we’ll be hosting boat shows annually in May and September.”

Beyond the alluring display of boats, the show featured a multitude of fast, luxurious, and sophisticated cars from the nearby Black Horse Garage. Whether it was Aston Martin or the brand-new Genesis vehicles, guests were in awe. Luckily, patrons did not have to be car aficionados to appreciate the beauty of what was on display. Showpiece Shows did a remarkable job presenting the first ever Steelpointe Boat Show. 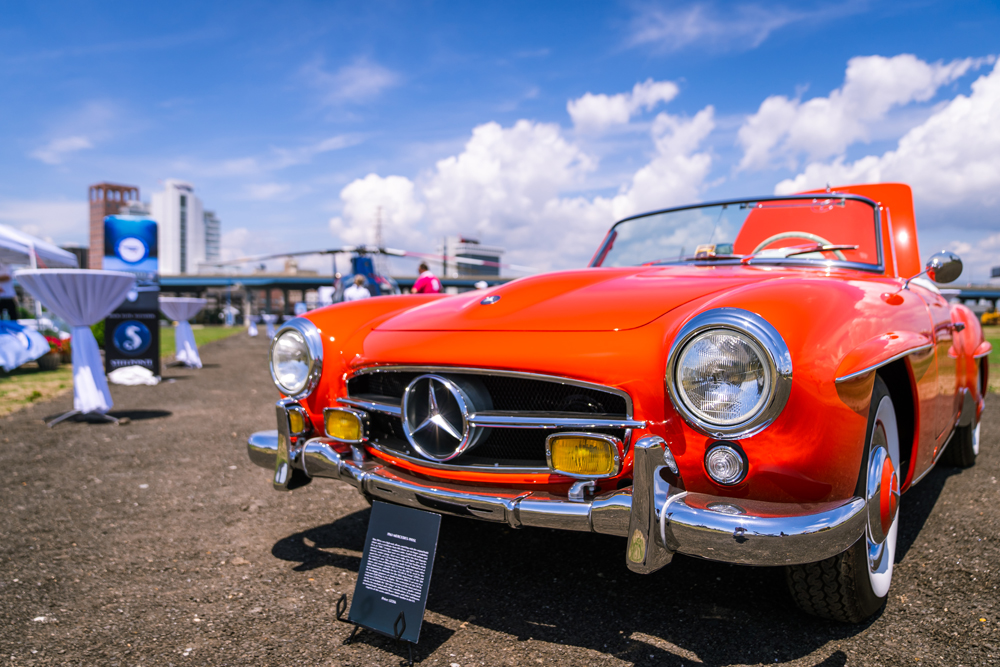 Keeping the recent pandemic in mind, the event remained fun and safe. The show organizers arranged mandatory temperature screening prior to entering, a touchless check in, as well as following proper social distancing requirements.

The wonderful weather, diverse food choices, and live music created the perfect Steelpointe Yacht and Charter Show experience. Steelpointe will host a marquee event September 24th-September 27th, 2020, which will be open to the public. The September show promises to draw a crowd of boaters, yacht fanatics, and community members along the state-of-the-art docks at Bridgeport Harbor Marina. 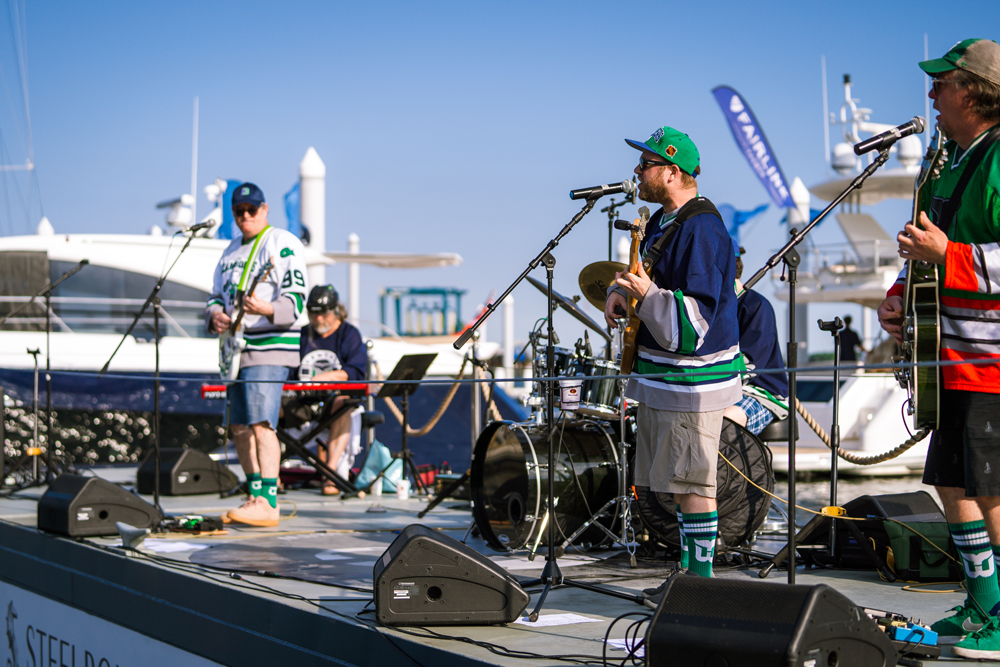 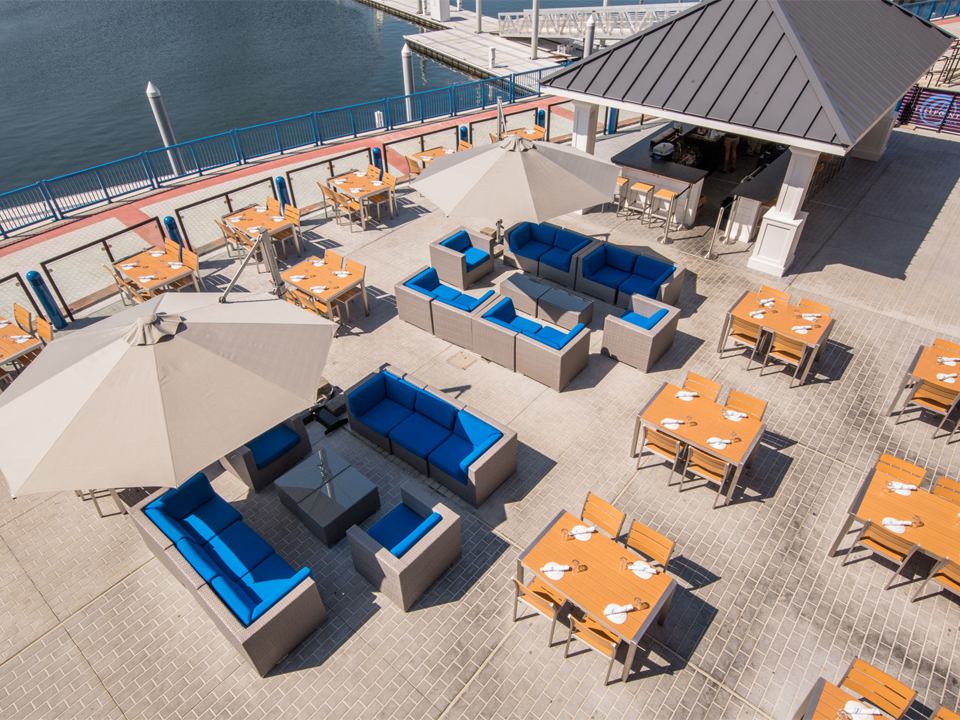 On May 20th, in conjunction with the Connecticut Governor’s reopening of the state, Boca Oyster Bar Restaurant at Steelpointe Harbor will be swinging its patio doors open to the public. While providing spacious patio dining on Bridgeport Harbor, Boca Oyster Bar will again serve patrons from its raw bar, exquisite seafood menu, and a variety of appetizing offerings. 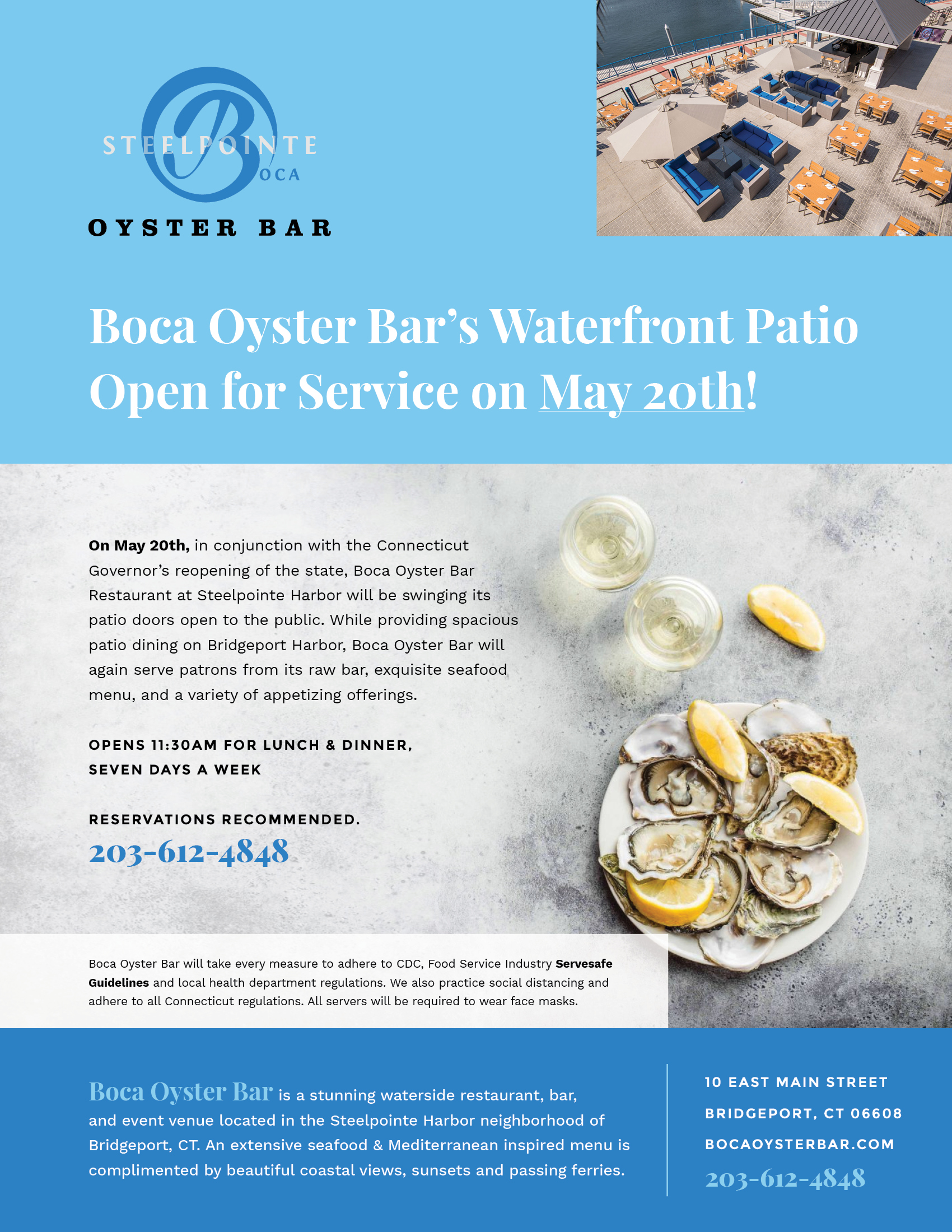 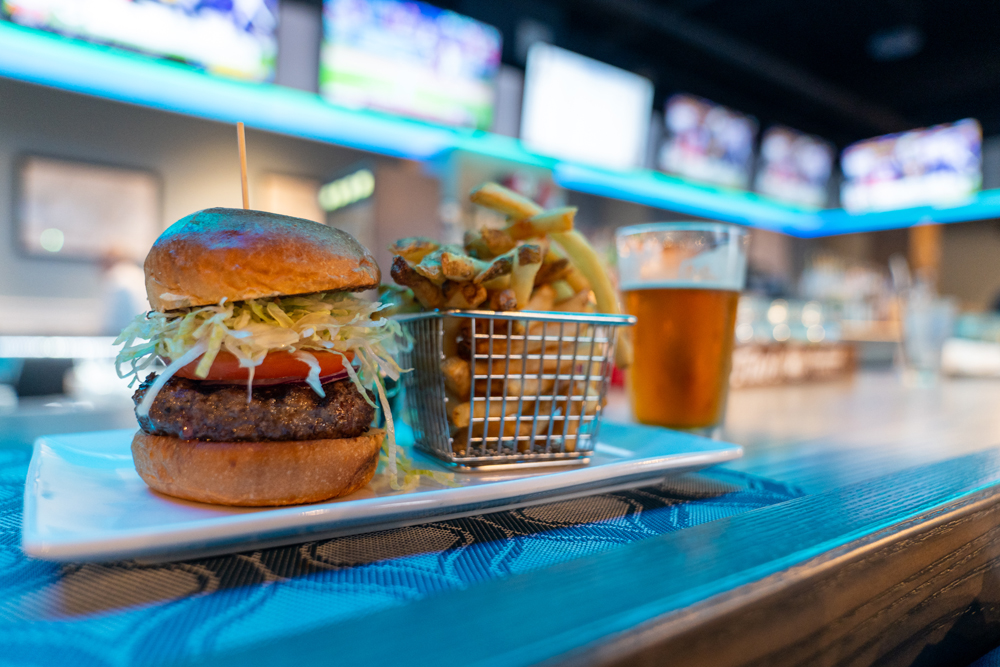 “Opening a restaurant demands a fervent love of the business… and because of that love restaurants have historically proven far more resilient than many other small businesses,” writes John Mariani in a recent article for Forbes.  We are overjoyed that on Wednesday May 20, Connecticut restaurants can begin opening their doors per the governor and the state’s reopening plan.  Things may look a little different at first- outdoor dining only, reduced capacity, spread out tables, and in some cases limited hours- but we are thrilled to return to our favorite local eateries.  Here is a guide to restaurants reopening on May 20. Please let us know if you know of anyone not on the list. Please note that we are trying to keep up with updates, but these details are subject to change. Please call your favorite restaurants ahead of time to confirm. 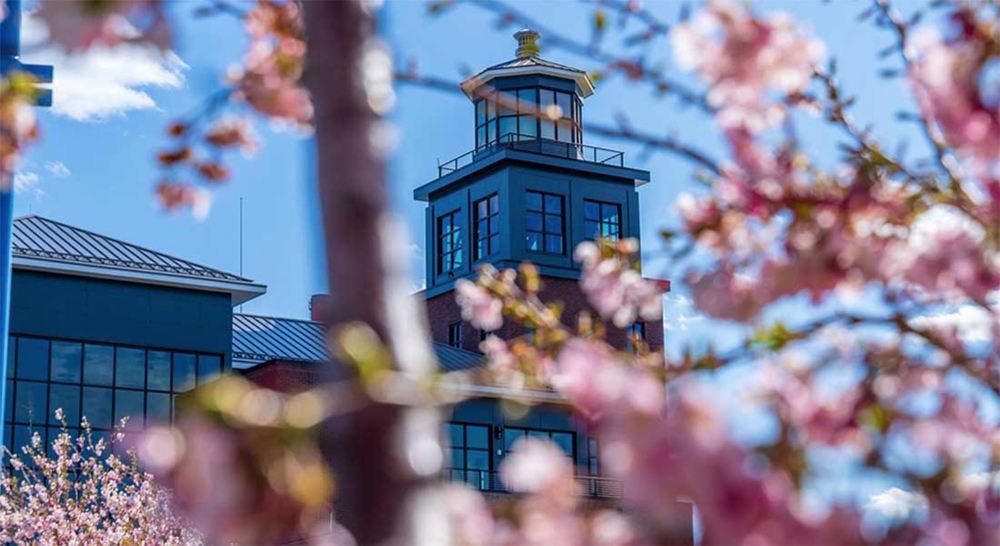 Northeastern residents and cruisers count Newport, Rhode Island as a popular summer destination and seasonal base. Several superyachts book slips in New York City, too, and head out east along Long Island’s Gold Coast. Few, however, consider Connecticut an option. The developers behind the newly opened Bridgeport Harbor Marina aim to change that.

View the full article on MegayachtNews.com 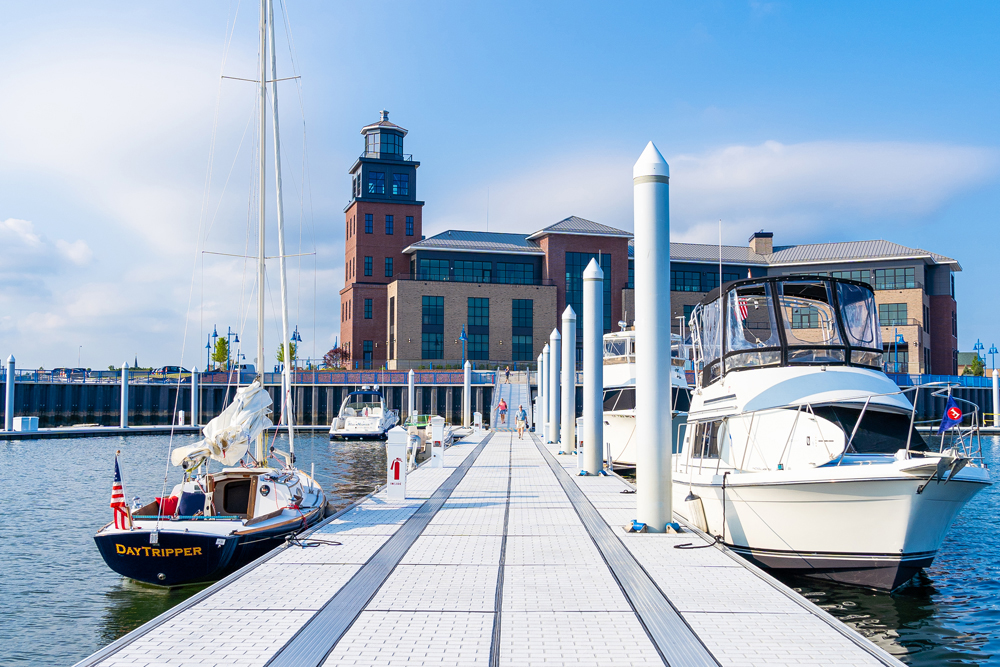 Bridgeport Harbor Marina was recently featured in the March 2020 edition of Soundings Magazine. The magazine is a feature publication for pleasure boaters and has award-winning coverage of people, issues, events and technology of recreational boaters. In the full article below, developer Robert Christoph Jr. talks about the history, present, and future of Bridgeport Harbor Marina with feature writer Kim Kavin.

The Next Big Thing

COULD BRIDGEPORT, CONNECTICUT, BECOME JUST AS MUCH OF A BOATING DESTINATION AS, SAY, NEWPORT, RHODE ISLAND?

What “flyover country” is to the United States, the Connecticut coastline has long been to Northeast boaters. Stuck between bustling New York Harbor and Rhode Island’s marine mecca of Newport, the Nutmeg State is a place that a lot of boaters simply cruise past on their way to somewhere else. Nice view. Pretty waterfront homes. Ho hum.

Developer Robert Christoph Jr. is working to change that, and to make Bridgeport, Connecticut, the next great boating destination in the region. The city is about 60 miles from Manhattan and about 120 miles from Newport, making it a natural waypoint for many boaters in terms of distance. It’s also a natural waypoint in terms of marine topography: The approach depth at mean low water is 12 feet, and there are no bridges between Bridgeport Harbor and the Long Island Sound.

Since the early 1980s, developers with fanciful ideas have been saying they want to redevelop the area known as Steel Point, a peninsula just south of Bridgeport’s downtown. Plans have come and gone, as have the developers themselves, and then the dilapidated structures that were there finally went away too. Christoph, who once owned the Bahia Mar marina in Fort Lauderdale along with several others, says he started working on taking over the Bridgeport site nearly two decades ago.

“I’ve been working on this project for approximately 19 years,” he says. “The City of Bridgeport was looking for somebody to develop 55 acres on the waterfront. There were several yacht clubs, an oyster company, a steel plant—they were being relocated. Nothing was wrong, but the city was going through a process of condemnation.”

His vision at the location is for a boater’s recreational mecca, including waterfront dining, shopping, concerts and marine services. A marina with 200 slips for yachts as long as 300 feet is now completed, and there’s a 150,000-square-foot Bass Pro Shops, a Starbucks, a Chipotle and a T-Mobile store. Christoph’s company, Bridgeport Landing Development, also built a 44,000-square-foot waterfront building that houses the dockmaster, office space and the Boca Oyster Bar restaurant.

About a thousand boaters tried out the new marina slips and the restaurant last summer, according to Christoph. “They enjoyed Bridgeport Harbor in a way they haven’t in a hundred years,” he says of the marina’s first clients. “A lot of people don’t know it exists, so we’ll be hosting boat shows in June and September. We’ll have a yacht and charter show in June. We think it’s important to have the show in the summer to show people what’s available, and then in September there will be another boat show.”

Also part of the growing development is the old Derecktor Shipyard site, which is across Bridgeport Harbor from the marina. The yard is now called Bridgeport Boatworks, and it has 75- and 200-ton Travelifts, repair services, a paint shop, and outside as well as heated inside winter storage. The next phase of development is expected to include waterfront apartments and, if lawmakers agree, a resort and casino. The process of getting the gaming permit will take some time and quite a lot of lobbying; a new casino would compete with the Foxwoods Resort and Mohegan Sun casinos, which are farther from the population mecca of New York City than the new Bridgeport casino would be. “We are partnered up with MGM Resorts International to bring a hotel and entertainment facility to Connecticut,” Christoph says. “We’re working on that with legislation, for a hotel-casino.”

For this summer, though, boaters will be able to get their first look at the completed marina and restaurant. Seasonal slips are available, with security cameras, access card-controlled gangways, pedestal-mounted water and power (30-, 50- and 100-amp), in-slip pump-out, complimentary Wi-Fi, and a fuel dock with diesel and gasoline. The marina also has air-conditioned bathrooms, showers and laundry facilities.

Those types of amenities are important, Christoph says, based on his own experience owning a San Juan 48 powerboat and a J/121 sailboat. He has cruised to marinas in the Northeast as well as on the Great Lakes, and, like most boaters, wants to be comfortable when he is tied up at the dock.

“The majority of the marinas in the Northeast are older facilities that modern boats have outgrown, either in beam or in power,” Christoph says. “A 50-foot boat can take up to 100 amps. Some of these Ferrettis and the new Hatterases, there’s just so much electronic gear on them, it pulls. It trips the breakers all the time. We have three-phase and power for the megayachts down to 30-amp boats. Depends on the slip. We built it for the boats of today and of the future.”

Individual cruisers are of course welcome, Christoph says, adding that “we also have manufacturers and rendezvous coming, fishing tournaments, sailing regattas—that is all part of the future.”

“Stamford went through its building boom, and I think the next city to go through that building boom is Bridgeport.”

And when boaters come to the city, he says, they can enjoy music. The old Ballpark at Harbor Yard, where the Bridgeport Bluefish used to round the bases, is becoming a LiveNation amphitheater open from spring through fall—coinciding with the region’s prime boating months. Much of the original ballpark seating will remain, with a stage going up where center field used to be, and new seating added at stage level. The arena will hold 5,500 people for concerts and other performances.

Boaters won’t be able to anchor in the harbor on concert days the way they do for events such as the Newport Jazz Festival (too much ferry traffic would make doing so a hazard in Bridgeport), but the location of the new amphitheater should be a boon for marina patrons. “It’s about 200 yards from the water,” Christoph says. “You could dock at the marina and listen, or dock here, have dinner here at Boca Oyster Bar and go to a show. We’re looking to create a full-service destination.”

As for anyone who has lingering doubts about Bridgeport as a destination because of its history, which included a fair share of blight and crime, Christoph says the time he has spent in the city recently erases all concerns. While the city’s past may have been an obstacle to redevelopment, he says, its present is increasingly modern. For Bridgeport, as with other cities in Connecticut, including Stamford, redevelopment is taking place at a fast clip.