Jason Mraz is coming to Bridgeport with special guest Raining Jane on Saturday, August 6! Tickets are available Friday, March 25th, 2022 at 10am. Get Tickets here!
Part of the Chevrolet Concert Series. 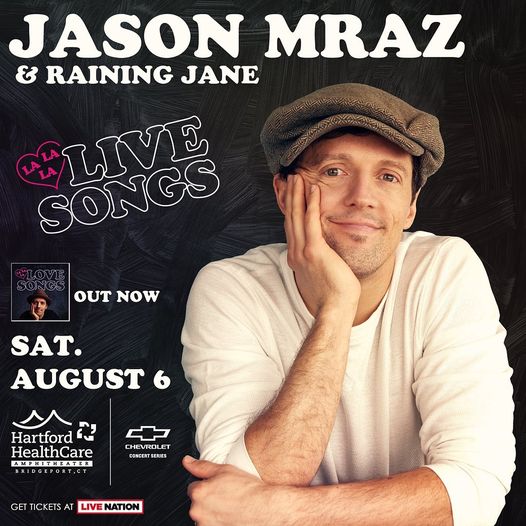 Jason Thomas Mraz is an American guitarist, singer, and songwriter. He rose to prominence with the release of his debut studio album, Waiting for My Rocket to Come (2002), which spawned the single “The Remedy (I Won’t Worry)”, that reached the top 20 on the Billboard Hot 100 chart. His next two studio albums, Mr. A-Z (2005), and We Sing. We Dance. We Steal Things. (2008), peaked in the top five on the Billboard 200; with the latter album spawning the Grammy Award-winning singles “Make It Mine”, and “Lucky” with Colbie Caillat.

The album’s lead single “I’m Yours”, reached the top ten on the Billboard Hot 100, while spending a then-record 76 weeks on the Hot 100, and was certified Diamond by the Recording Industry Association of America (RIAA). His fourth album, Love Is a Four Letter Word (2012), peaked at number two on the Billboard 200, becoming his highest-charting album to date, and spawned the single “I Won’t Give Up”, which became his second top ten on the Hot 100.

Along with receiving two Grammy Award wins, Mraz is also the recipient of two Teen Choice Awards, a People’s Choice Award and the Hal David Songwriters Hall of Fame Award. As of July 2014, Mraz has sold over seven million albums, and over 11.5 million in digital singles. His musical style, from rhythmic feeling to his use of nylon string guitars, has been heavily influenced by Brazilian music.