Ringo Starr & His All Starr Band live in Bridgeport

RINGO STARR & HIS ALL STARR BAND come to Bridgeport, Friday, Sept 23.
Catch Ringo with his friends Steve Lukather, Colin Hay, Warren Ham, Gregg Bissonette, Hamish Stuart and Edgar Winter. Tickets available at: https://bit.ly/3jz1RuJ
Brought to you by your friends at the Sound On Sound Music Festival.
Part of the Chevrolet Concert Series. 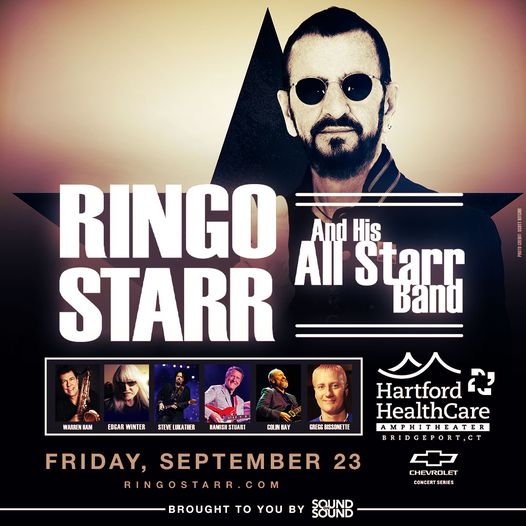 Sir Richard Starkey MBE (born 7 July 1940), better known by his stage name Ringo Starr, is an English musician, singer, songwriter, and actor who achieved international fame as the drummer for the Beatles. He occasionally sang lead vocals with the group, usually for one song on each album, including “Yellow Submarine” and “With a Little Help from My Friends”. He also wrote and sang the Beatles songs “Don’t Pass Me By” and “Octopus’s Garden”, and is credited as a co-writer of others.
Ringo Starr & His All-Starr Band is a live rock supergroup founded in 1989 with shifting personnel, led by former Beatles drummer and vocalist Ringo Starr. The band has consistently toured for over three decades and rotates its line-up depending on the availability of musicians and at Starr’s discretion. All-Starr Band shows generally feature 10–12 songs sung by Starr, including those he performed with The Beatles and in his solo career. Mixed with Starr’s songs are those performed by the All-Starrs (usually 2–3 per person), generally the biggest hits from their respective groups or solo careers.