The Temptations in Bridgeport w/ The Four Tops 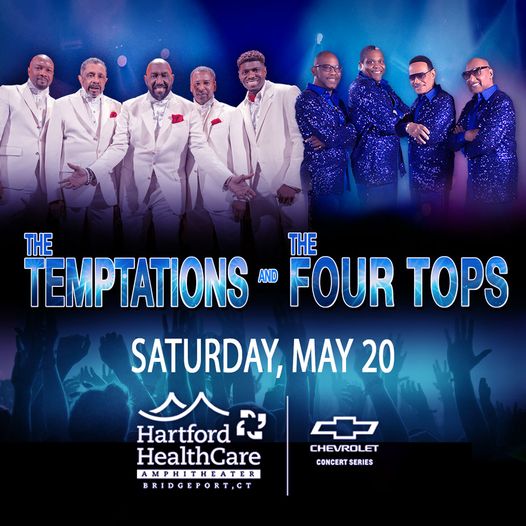 The Temptations in Bridgeport w/ The Four Tops

Motown’s Magic is coming to Bridgeport ✨ Don’t miss The Temptations & Four Tops doing all their classic hits on Saturday, May 20!

The Temptations are an American vocal group from Detroit, Michigan, who released a series of successful singles and albums with Motown Records during the 1960s and 1970s. The group’s work with producer Norman Whitfield, beginning with the Top 10 hit single “Cloud Nine” in October 1968, pioneered psychedelic soul, and was significant in the evolution of R&B and soul music. The band members are known for their choreography, distinct harmonies, and dress style. Having sold tens of millions of albums, the Temptations are among the most successful groups in popular music.

Featuring five male vocalists and dancers (save for brief periods with fewer or more members), the group formed in 1960 in Detroit under the name the Elgins. The founding members came from two rival Detroit vocal groups: Otis Williams, Elbridge “Al” Bryant, and Melvin Franklin of Otis Williams & the Distants, and Eddie Kendricks and Paul Williams of the Primes. In 1964, Bryant was replaced by David Ruffin, who was the lead vocalist on a number of the group’s biggest hits, including “My Girl” (1964), “Ain’t Too Proud to Beg” (1966), and “I Wish It Would Rain” (1967). Ruffin was replaced in 1968 by Dennis Edwards, with whom the group continued to record hit records such as “Cloud Nine” (1968), “I Can’t Get Next to You” (1969), and “Ball of Confusion (That’s What the World Is Today)” (1970). The group’s lineup has changed frequently since the departures of Kendricks and Paul Williams from the act in 1971. Later members of the group have included singers such as Richard Street, Damon Harris, Ron Tyson, and Ali-Ollie Woodson, with whom the group scored a late-period hit in 1984 with “Treat Her Like a Lady” and in 1987 with the theme song for the children’s movement program Kids in Motion.

The Four Tops are an American vocal quartet from Detroit who helped to define the city’s Motown sound of the 1960s. The group’s repertoire has included soul music, R&B, disco, adult contemporary, doo-wop, jazz, and show tunes.

Founded as the Four Aims, lead singer Levi Stubbs, Abdul “Duke” Fakir, Renaldo “Obie” Benson and Lawrence Payton remained together for over four decades, performing from 1953 until 1997 without a change in personnel. The Four Tops were among a number of groups, including the Miracles, the Marvelettes, Martha and the Vandellas, the Temptations, and the Supremes, who established the Motown Sound heard around the world during the 1960s. They were notable for having Stubbs, a baritone, as their lead singer, whereas most other male and mixed vocal groups of the time were fronted by tenors.

Don’t miss The Temptations in Bridgeport, CT with The Four Tops!!